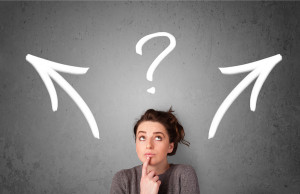 You’ve heard a lot about the SAT and the ACT tests and now it’s time to start preparing to get a high
score on one of these tests. So what’s the difference between the two tests?

One of the biggest differences is speed.

The ACT covers a wider range of math concepts.

Is the thought of revisiting all of the geometry concepts you learned a couple of years ago make you want to consider a gap year before college? Would you rather not review logarithms and

Science shows up only minimally on the SAT in the form of two scientific reading passages, but the questions don’t really test science. The ACT, by contrast, has a full science section. This section is intimidating to many students, particularly those who are not strong in science. However, don’t assume that the science section will be a struggle too quickly. While some basic science knowledge is required on some questions, the majority of questions require you to find information in charts and graphs and to evaluate the data given in the passages rather than to use outside knowledge.

Obscure vocabulary words are no longer tested with sentence completion questions on the SAT. However, more difficult vocabulary still appears on this test than on the ACT, but it has a much smaller impact on the score than it did on the old verison of the SAT.

*Important note: This blog post refers to the new SAT that will be offered for the first time in March 2016.

CALL FOR AN ASSESSMENT

Get Updates by Email!

When you are committed to the best, where do you start?

When you do everything possible to see your child excel, what do you look for in an Academic Coach or a Test Prep Program?
At Excellence for College we guide your child to take active responsibility for their academic success. We build a solid foundation so they excel now, in their college classes, and in life. We deliver a personalized yet rigorous structure to keep your child inspired and on track toward high grades and their best test scores.

Sneha got her score and I am so excited I start crying. She get 2310. You should take your son or daughter to Amy even if she have good grade. She make sure your daughter get top SAT score.

My daughter just found out she was accepted at Georgetown… And this is all because we found Amy to help her on the SAT. I thought that she would have to settle for one of her safety schools when she got an 1820 the first time…

Amy provided outstanding tutoring to my daughter. A friend recommended Amy to assist my daughter in Honors Chemistry. Amy helped my daughter to really understand the concepts and to be able to answer the most difficult problems.

You helped increase Preeti’s score to a 2250 and she is now feeling much more confident about getting into Berkley. Thank you so much for all of your help in making preparation for the SAT and SAT Chemistry Subject Test so painless.

I can’t believe that I started out our sessions with a 1600 and ended up with a 2200. All of the essay and critical reading torture truly worked miracles and I want to thank you once again for your help.

Amy looked at Kate’s SAT test from October and figured out exactly which areas she needed the most help on. We really liked the weekly progress reports and the all of the assignments. And all of this hard work paid off: We just got Kate’s scores and she got 2400.

You are a breath of fresh air, and clearly excited about what you are doing.  To be able to offer guidance and instill more self-confidence in our kids is a wonderful thing.

Amy quickly assessed what she (my daughter) needed to boost her (SAT) score… I didn’t totally believe that this was going to translate into a real score improvement on the official test. But it did (2360) and my little girl is on her way to Georgetown!

Amy helped my daughter acquire the skills she needed along with a new confidence that I haven’t seen in her before. She went into the exam (SAT) confident that she was going to do well and she did. She got a 2340.

Within a month and a half Alyssa’s score increased by 700 points. We really like the fact that Amy adjusts the assignments to Alyssa’s needs. We’re very grateful to Amy for all of her help.

Mark your calendar with these official SAT, SAT Subject, and ACT test dates:

For information, or to schedule an assessment for your student: